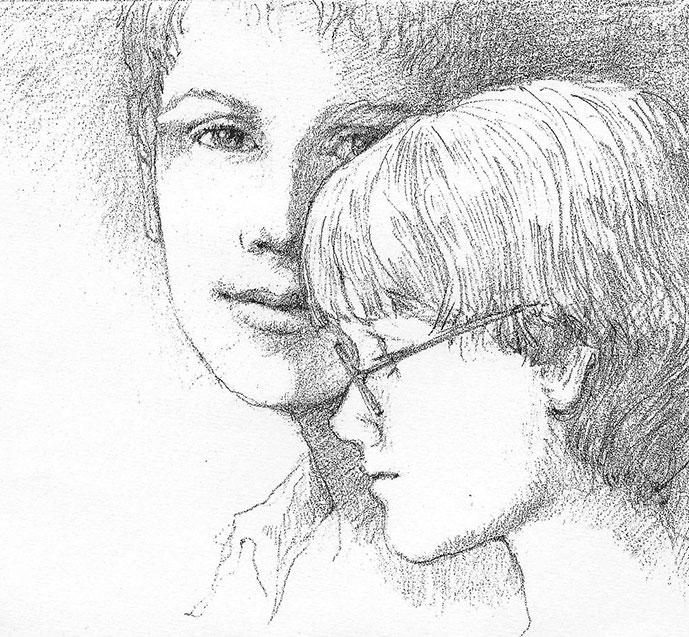 Thelma Scace looked around from the dishpan in astonishment. Kevin had burst into the room, his hair wild, a dressing gown barely around him.

“Kevin! You’re up early. Is something wrong?”

“Of course I’m alright, though I’m nearly dead with surprise. How come you’re up so early?”

Kevin never got up on time, let alone early.

Kevin turned and rushed out of the room. She could hear him taking the stairs two or three at a time.

“It’s all right, Mum, he’s here!” came down to her from Kevin, moments later.

Well, thought Thelma, where else would he likely be? Still it was unusual. Brian was usually up first, struggling to breathe until he had had something to eat, and so they often had a largely silent mother and son tete-a-tete. Thelma herself was an early riser, though this did not mean that breakfast appeared for the family within minutes of her getting downstairs. She was always dressed – slacks or at summer’s height, shorts – and she moved quickly around the kitchen. But she was always distracted by the numerous things which hadn’t been done the night before, and so any member of the family in need of a quick breakfast was apt to be impatient.

Brian was such a member. He had to eat to get breathing again, usually, and he would come down and fix his cereal and toast while his mother fussed with tidying or organizing or getting food from the freezer for later use. On occasion he would make her breakfast, and even his father’s. The little girls were usually up next, but he found it easier to leave them to his mother. And even on school days when the bus would be arriving at the corner shortly after eight-thirty, Brian would be there, but Kevin would be late and in a fog.

While Thelma’s bond with her first-born was such as only mothers and first-born sons can fully understand (though they seldom understand it themselves), this was a rather precious time for Thelma and Number Two. Brian was always inclined to ask questions, or to make statements, about the world of nature or the world of people – more about the former – and these were the source of both mystification and pride for his mother. Recently his phase had been geological and scientific.

“The sun doesn’t come up, mother, the earth dips towards it.”

“Night is really a shadow rotating around the earth”.

It was rewarding to see some of her own intelligence reflected in Brian, just as it was both rewarding and painful to see her own temperament reflected in Kevin.

Kevin reappeared. He had brushed his hair and climbed into some clothes. He was moving warily, a little like a drunk man who is not sure whether the objects around him are six inches or two feet away. But otherwise, he was not his usual fogbound morning self. His eyes were alert, and the slightly groping nature of his movement was based on heightened rather than less awareness.

“Of course,” said Kevin unconvincingly. “Sleeping without a snore or a cough.”

One admirable quality, Thelma reflected, was that Kevin was absolutely loyal to Brian, and always concerned for his well-being and safety. Brian had never ceased to be the baby to Kevin, bringing out of the storehouse of his personality things new and old; the girls had, in consequence, born the full weight of Kevin’s anger and jealousy, as he saw them in rivalry to his own place in his parents’ affections.

“That’s good. I would have thought the fog would have bothered him last night.”

Kevin looked at his mother quietly, and then set about finding himself some breakfast. He was not very good at this normally, but this morning his approach to life was suddenly calm.

“Mummy, do you think.. . when someone does something he shouldn’t have… might he have dreams about it?”

Thelma foresaw Kevin reading Carl Jung, as she herself had done as a teenager. He might at least get some self-awareness out of it.

“Have you been having dreams?”

“Morning Kevin,” his father strode in, “Unusual to see you up and dressed so early.”

“Will you explore something for me, and report back?”

“Explore that excavation down there being done by the earth-mover. We’ll see what Mr. Bondworthy’s outfit is up to. Spy out the land. That’s a good day’s work for you kids. I want a full report.”

“Mind you don’t get too close to his machines or fall into anything,” said his mother.

“And whatever else you do, don’t go playing war games and attacking the men, or we’d be in real trouble with that gang.”

Albert Scace was taking his son’s expedition quite seriously. Kevin was flattered and suddenly felt very grown up, an ally for a change.

Brian looked at his mother as he came to the door.

“I’m sorry Mum, did you need some help?”

“No, of course not. Kevin woke up thinking you weren’t here, and finding you seems to have sobered him, wakened him and made him human for breakfast time.”

Kevin scowled at the sarcasm.

“I had a really good sleep.”

Kevin looked up when Brian said this. But no hint of a mutual secret was found in Brian’s eye.

“Nothing wrong with it at all, nor sneezes neither.”

“But yesterday you were snorting all over the place from the grasses!”

She turned and looked at him closely. There was no red in his eyes, no puffiness in the eyelids, no drip from his nose, and he was breathing through it instead of his mouth.

“But aren’t you hungry Brian?”

“Better have some tea anyway, and toast. Are you going on this James Bond adventure with Kevin and Bart?”

Normally at this time of year Brian had to keep quietly to himself or asthma would lay him flat.