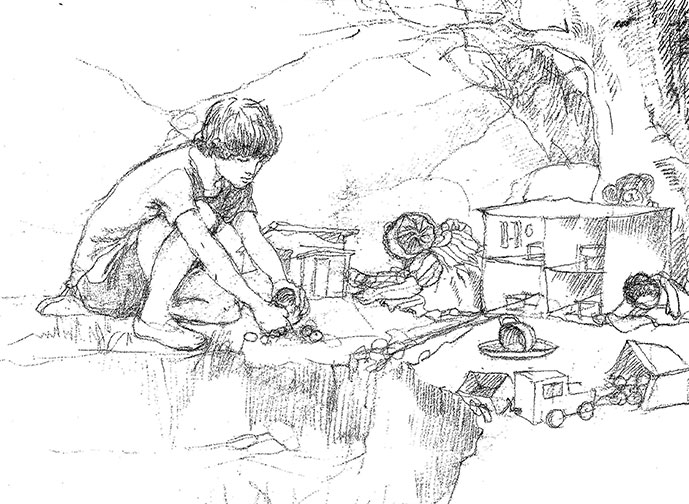 Kevin and Bart left the scene of their ghostly triumph quietly, continuing in their retreat the tactics of their advance; wiggling through the long grasses, taking shelter behind trees, making elaborate signals to each other with whistles and sticks held up. What before was deadly serious was now celebrated in a kind of dance, if you can do a dance on your belly wriggling along, tickled by earth things. Not till they reached the line of trees that marked the road allowance did they make any sound. Then with modified whoops lest any enemy ears be sharp, they entered the second stage of their triumph: they did mock battle with each other. Kevin wrestled traditionally, Bart with the techniques and shouts of judo.

Finally exhausted, they sat down in the circle their joust had cleared. Bart was the first to speak.

“Oh! Brian! I forgot about him He must have gone ahead to the culvert.”

“Recce! Come to order! We must not mock our comrade in arms. He may be at this moment suffering at the hands of the enemy!”

“Very good sir! Shall we have a rescue party?”

Bart had suddenly become an English officer and was screwing up one eye as if with a monocle.

“At once” said Kevin, getting up. Not waiting for Bart, who was spluttering words like `India’ and `pukka’, he started down the road. Bart ran after him.

Bart was serious and anxious at once.

“Might be. He’s not too good at combat. Thinks too much.”

“We’ll find him, even if Bumworthy’s got him! Bumworthy, Bumworthy, you’re not worthy of a bum!”

Bart looked. There emerging from the culvert ditch was a bedraggled Brian, holding a stone in one hand and a stick in the other, his eyes frightened behind his glasses. He scrambled up the road, and looked behind him.

Brian called back and began to stagger up the road.

The two warriors ran down to meet him, and Kevin forgot his reserve so much as to hug his brother, while Bart danced around and cartwheeled.

“Our spy escapes the wicked enemy! He foils his foes! With his magic stone and wand of willow he wrecked them every one!”

Brian looked around for something to sit on. He chose a boulder in the hedge, and the others squatted down beside him. In spite of his experience, he was still miraculously free of his asthma.

“It’s like this. I lost you guys, and figured you’d gone the way we agreed. Where were ya anyway?”

“We caught a party of the enemy in the field and drove them… Tell you later, you go ahead!”

“So I went along the river bed to the field. They’ve made a terrible mess there, torn down the apple orchard and most of the woods; holes and rocks and building blocks all over the place. I sat in a tree and watched. Old Bumworthy came along with some guy from the city. Bumworthy called Daddy a red-haired bugger!”

Bart said, “Ve shall shoot him, hangink upside down.”

“One reason they have so many holes is they can’t get any water. Funny, because old Putnam has had lotsa water and a pond too. Anyway, the guy from Toronto had some big news for Bumworthy from his boss, but I missed it.”

“Nearly fell out of the tree. Had to come down, anyway, and the city guy grabbed me. So I yelled at Bumworthy that Daddy would get him and he turned white and I got away.”

“Too bad you didn’t hear. They may be plotting to do something to Daddy. Funny about the water too.”

The three moved off in silent procession up the hill, the brothers going ahead together quietly, Bart behind them, jumping and jack-acting to his heart’s content. It had been a fine morning’s work. One enemy defeated, and their intelligence man back, unscathed.

When they drew opposite the toy village, Kevin just finished telling Brian how they had driven off the survey crew. Then he paused, remembering yesterday.

“Take M.I.O.7 home to the mess. Tell the mess sergeant I’ll be along presently. I’m going to take a last look from the next field. to see the enemy’s dispositions.”

As the two went out of sight, Kevin slipped over the side of the road and down to the pool. His mind was not at all on the day’s events, but on what he had done, and, remotely, what happened last night. He gathered some moss and began to clean up, mopping the wet spots in the village, setting the dolls on their feet, and rubbing the surface of anything he had defaced. The smell was bad, but not as bad as the smell he remembered from last night. Then he recalled that the smell had been his own.

He squatted down at the end of his labours and thought about it. It was impossible to believe that it wasn’t a dream; perhaps that business at the end had been a dream when he had seen the family of strange creatures at the lake shore. But the cave of ice, his furry skin, the rush of water and mud, the smell… These were as real to him now as they had been the night before. Yet how could it have been real?

He slapped his knee. Of course! The proof was Brian, Brian had been there! And Brian had been immune from the dampness and was immune from his allergies today. Yet Brian hadn’t said anything about it. Come to think of it, since that wild awakening when he thought that Brian was drowned this morning he had not thought about it, nor mentioned it to Brian. He would ask him, first chance he got.