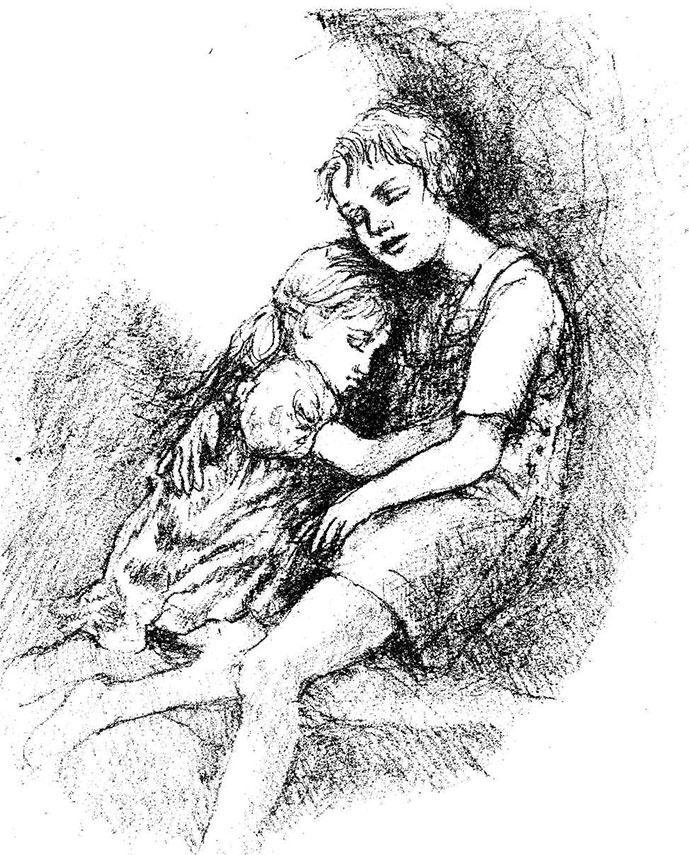 Kevin Scace rushed downstairs, raging at his sisters, and out the front door aiming a kick at the old yellow cat as he ran. There was a front verandah with heavy vines hanging at one side, great heart shaped leaves cascading down over the railing and into the flower bed. He raced out across the lawn to where the driveway passed. Then he stopped, and listened.

To his surprise, no screaming came from the girls upstairs. Funny. He thought he’d landed them a good thump each with the book he had been reading when they teased him. He must have missed. Little bitches. He’d get them. But, unusually, no sounds followed him out of the house. Instead, the hot summer day took over with its steaming silence.

A distant shout came to him. Somewhere down below a tractor was grinding its way back and forth across the field. He tried to see it, and walked across the drive to the rail fence which protected the edge of the steep slope which fell away in front of him and on two sides. As he looked across he could see the snug village of Warkworth nestling beneath a hill of trim pines, planted there forty years before.

The church spire pointed up like a sharp pencil among the roof tops and trees. Looking further he could see the red water tower of the medium security prison, a threatening focus in the distance. Closer, there were gently rolling fields laid out in various strips and squares: brown, newly plowed, light green, just sprouting and the darker green of winter wheat.

Then just to the right and near the road allowance which passed straight down the hill, he saw the tractor. He looked more closely and saw that it wasn’t an ordinary tractor but an earth moving machine, scraping away the side of the hill, down along the mysterious sand hills that traced a border along the floor of the hill on which he stood.

His thoughts were interrupted by screams and giggles from an upstairs window behind him, and he turned around in time to see a collection of papers, books and model airplanes falling on to the verandah roof. They caught in the vines by the eaves trough, and hung there. But Kevin had no trouble recognizing his own possessions and noticed that one model’s wing had broken as it fell out of the window. Raging again, he ran back the way he came.

“Little bitches! I’ll fix you!” he shouted as he burst through the door, colliding with his mother.

“Stop that language at once!” said Mrs. Scace, grabbing him by the shoulder. “That’s no way to talk to your little sisters!”

Kevin stood glaring at his mother, hating her tall strong figure, every inch. They were very much alike, she with her blond straight hair in a boyish cut, he with his equally blond and straight hair, cut much longer, framing his boy’s face and curling lips, his long eyelashes wet with a few light tears of frustration. They were dressed alike too, his mother in a shirt top and the rough but smart jeans she wore about the house, and he in a dark top and shredded jeans which twelve year olds wear like battle scars and preserve as though they will be needed by their grandchildren. For twelve, he was tall even in comparison with most Ontario boys of his age, but he was not quite his mother’s height. She had his same curling lip, but it was matched with crow’s feet in the corner of her eyes and a twinkle which was not far away even when she was angry.

Kevin thought of the possibilities of breaking from her grip and pursuing Linda and Debbie; he also considered in balance, whether he preferred scoring on the girls who would shriek, and his mother’s inevitable fury, she could hit him twice as hard as he could hit the girls, or whether he would make peace with his mother’s cool eyes. The eyes won, and Kevin began to wilt.

“Mummy, they’ve thrown my books out of the window and broken my model airplane on the roof”

“Nothing. They were teasing me.”

“And you lost your temper. Which is just what they wanted. Won’t you ever learn? Now get the ladder and get your things from the roof and stay away from them.”

Kevin went to the garage for the light aluminum extension ladder. His mother looked after him for a moment, wondering why he was being so obedient for once. But Kevin was plotting his revenge and gradually his stride slackened. As he no longer thought of bringing each foot down on their dirty necks, but began to taste, sweetly, the much more subtle vengeance which was taking shape in his mind.

When he had gathered his things from the roof and taken them back to his room, he stood looking out the window. He could see his sisters making their way down the overgrown road allowance. Linda the older, had the same shock of stiff red hair as his brother Brian; Debbie, at six, two years younger than Linda, had hair much like his own. They were in other respects quite unlike. Linda was slow and dumpy, witty in her responses and the source of most mischief the two got into. Debbie was elf-like, prancing and dancing and very feminine. They clutched some miniature dolls and threaded their way through half grown sumac’s, carefully avoiding the poison ivy which was thick at the sides of the seldom used track. After a moment, they disappeared from Kevin’s view, their chatter and giggles fading away beneath the hill.

A new glint came into the boy’s eye. He had intended to desecrate the girls’ favorite possession in the worst way – no the second worst way he could think of. But seeing them going to a favorite play spot reminded him that he could be equally nasty down there with a far better chance of getting away with it. He went down the stairs quietly and drank three glasses of cold water, till he could hold no more.

Once outside, he did not follow the road allowance. Instead he followed the driveway past the house and to the barn. Anyone watching from the house would assume that he was going into the barn to work at some job or just to play. But Kevin emerged from the lower end of the barn well out of sight, and began to move slowly, he crouched on his hands and knees, either to keep out of sight of any imaginable watcher at the hill’s edge, or to creep under the grape vines which decorated most of the thorns and made a thick tangle for the intruder.

And so he made his way around the hill. There were a few glacial boulders to climb over, or to hide behind in his more dramatic moments: finally, the road allowance came in sight, dropping steeply down the hill. On the far side about half way down, there was a sharp rocky drop at the edge of the path, and here the children used to play beside a little pool of water formed by an over-running spring which oozed from the rocks. Here he could hear the two little girls playing and chatting. By now the water he had taken was beginning to make him feel uncomfortable, and yet there could be no relief until the girls were safely out of the way. How long would they stay? In drinking his water, he had calculated that they might go on playing in their doll’s village at the pool until lunch time. He could not hold out till then. He must do something to distract them and send them home. Perhaps if they heard a sound in the bushes they would be frightened. But it must be a sound on the other side of the roadway, not on his. Selecting a stone, he hurled it across the road, about the rocks and pool where the girls were. It landed with a crashing of leaves and a mild thump. The girls’ chattering stopped. Kevin waited. Then their noise started up again. Apparently it was not enough of a noise to frighten them. What could he do? He was becoming very uncomfortable.

Just then, he heard a further noise from the very spot where his stone had landed. There was movement in the bushes, and small animal squeaks, and more concentrated buzzing than is normal even on a hot summer day. Silence came to the pool again, and then the girls’ squeaks of alarm were added to others, and they scrambled up the road allowance, encouraging each other as if pursued. The hornets which had sent some small animal running were not in fact close behind them, but they might as well have been. The coast was now clear for Kevin.

The pool was just a little thing, about five feet square, with a rivulet emptying from it and a little waterfall filling it. One side was soggy turf, but on the other was a shelf of rock, and here for years the children had worked at a toy village. There were houses, some crude and some converted from indoor toy houses, a rusty railroad and some motor cars. At one end of the
street was something of a mansion, an old doll’s house with pillars and porch, and a removable top. Inside were rugs and kitchen equipment, little china cabinets and a grandfather clock, and dolls of various incompatible sizes. Two of these were out of place, just as the girls had left them, and the roof was still off.

Which was unfortunate for the dolls, for it began to rain, a pungent yellow stream directed thoroughly from room to room, until down the pillared porch it ran, through the street, and spread in eddies in the water.

Kevin had peed the pool