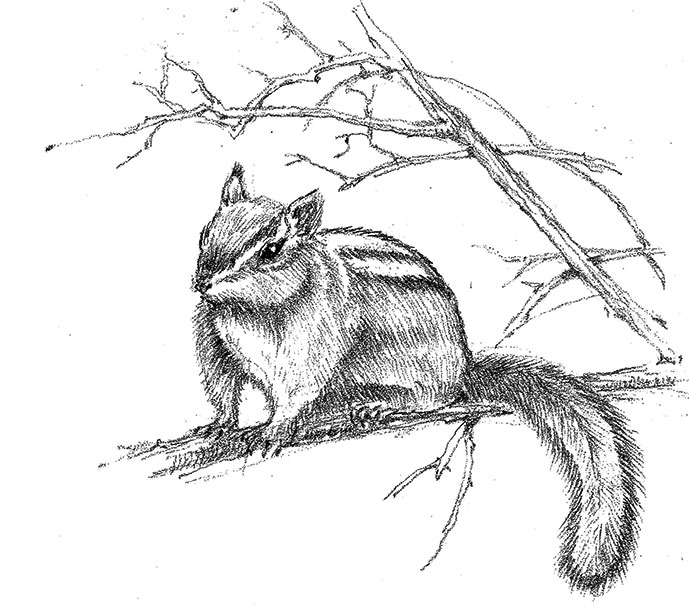 “Mummy, can we take a picnic lunch?”

“Where will you take it, dear?”

“To the toy village. It’s nice there.”

Thelma liked the idea of the girls being well out of the way when Kevin returned from his morning adventures. Living with him was a little like living with a volcano, or, more familiar to her on account of her late father, living with an alcoholic. She was never quite sure what Kevin’s mood would bring, and so she planned ahead, especially on holidays.

“Mummy, can we plan our lunch by ourselves?”

“I suppose so, what did you want to have?”

Debbie thought it was time she said something and rattled off:

“Peanut butter and bananas and ice cream and peanuts and pop.”

Thelma sighed; her irony and sarcasm was lost on the very young.

“I don’t know how your going to take ice cream on a day like this.”

“Put it in a jar and wrap it with something, Mum.”

Debbie had more to say; “And I want Crunchy Lunch on my ice cream!”

“Crunchy lunch as well as peanuts?”

“Okay, I’ll put the ice cream and granola and nuts in a nice peanut butter jar, wrap it in newspaper and leave it in the freezer till everything else is ready; you promise me to eat it first.”

“Yes Mummy,” said Linda, wondering what all the fuss was about…. Liquid ice cream was just as good , especially when that crunch was in it.

“Which way will you be going, in case we want to find you?”

“I told you Mummy, to the toy village.”

“Oh yes. Well, be careful. How are those little people getting on, out there in all weather?”

“Okay, we had to leave them in a hurry yesterday, something scared us.”

“It might have been a skunk but there was no smell.”

“Then it wasn’t a skunk. Did it make any noise?”

“It was creeping in the bush. And there was a plopping sound.”

Debbie’s contribution was accompanied with falling on the floor and pretending she was either a wild animal or a stone plopping in water. It was one or the other.

“I love you Mum.” said Debbie, batting her lashes and turning her head on her shoulder.

Linda looked on in good humoured scorn. She didn’t mind all the fuss over Debbie because she was such a baby and that kept her in her place and gave Linda authority over her. Linda was not quite old enough to realize that Debbie’s beauty might put her in the shade. Beauty was something to be appreciated, for Linda, but it did not compare with her mind and intelligence, which was what she admired, especially in herself.

“Have you had any more trouble with Kevin since yesterday?”

“Course not. Haven’t seen him today. He can’t boss me.”

“I’m not worried about him bossing you. Just him hitting you.”

“Perhaps, but you lead him on. And he’s really tempted by teasing. Anyway, stay clear of him. Here’s your lunch. The ice cream is hard on top, and you eat it first.”

The girls went out. Linda, as befits authority, carried the lunch. Debbie bounced and played over the road allowance, and they soon arrived at the toy village.

“The dollies, and the house we left!”

Debbie was right. There was a pungent smell, some of the fine veneer on the toy furniture was curled slightly and glistened with crystals, and in one or two places there were flies buzzing in clusters. This had never happened before, in all the summers they put the toy village out.

“That nasty, nasty animal, he messed up my dollies!”

“It was a nasty animal. We’ll have to clean up.”

“Please Lindy, not before lunch, let’s have lunch first. I don’t want to eat near the nasty animal.”

“Let’s go into the field so we won’t be far away.”

The girls scrambled through the bushes into the field. It was the field next above the one where just a few seconds before, Kevin and Bart played ‘poltergeist’ with the survey crews. The girls wandered, looking for a spot for lunch; they heard the engine of a jeep rev up, saw clouds of smoke, and could dimly see some shapes jumping up and down. But they did not recognize their brother and Bartholomew.

“No. We’ll do that later. Let’s sit right here and have our ice cream. We promised Mother.”

Even at her tender age, she felt it gave her some of her mother’s dignity to use the proper word instead of the affectionate one. So the two sat down and tucked into their lunch, Linda carefully arranged herself sitting upright, Debbie sprawled on her stomach her legs kicking in the air. The mess in the peanut butter jar was like the food of the gods to them, as they took alternate drippy swipes with their spoons, licking the ice cream from their chins and lips, and crunching the peanuts and granola with unashamed noise. This dessert of course, taken first, was so satisfying, that they actually paused before digging into their peanut butter and banana sandwiches.

“Lindy,” said Debbie in her baby voice, “Let’s eat the rest of our lunch down there.”

As a baby she used to turn scarlet in her high chair and fall asleep at the end of her feeding, making a luminescent glow in the kitchen. Such a mood was nearly on her, and she struggled to her feet. The two set off, rather more slowly, and Linda was not nearly so concerned about her authority and her dignity. Even Debbie wasn’t talking, and by chance was carrying the remains of the lunch.

The field they were in was quite large, and it took them some minutes to reach the rock, trees and wire fence. They slowly climbed down into this, and surveyed the next field where lately there had been some movement and action to attract their eye. Seen from the west, it sloped gently towards the east, the slope ending in a long bank.

Such banks are common in the valleys between the drumlins of Northumber-land: at some other time a stream had flowed there. Just below the bank the ground leveled off, and they began to climb again into the footworks of the next drumlin, a less outstanding mound than Scace’s Hill, which was both drumlin and escarpment. Cedars and thorns had been allowed to grow through the field, and at one point on the bank, there was a concentration of trees, pines, covering the upper and lower edge of the bank. These pines had a sudden chaste beauty, compared with the raggle-taggle brownish green cedars and the menacing thorns and wild roses. To this clump the girls made their way.

If they had approached from the lower side of the bank, they would have seen signs of recent activity: broken twigs, a hole forced into the interior, and electric wires protruding into the open air. But they came from above, and gentle natural openings invited them into their shade. They pressed in until they found a floor of needles, some ferns, a log to sit on a place to sit. They were on an older Ontario strand than they knew.

For a while the sound of munching was the only disturbance of the still moment of the day. Then the little sounds of nature were restored: crickets, a bird fluttering in the tree-top, small scratching as insects went about their business. Linda was propped against the log, sinking into deep sleep; Debbie lay again on her stomach enjoying the tickling needles, and gazing. After a while she became aware that she was being gazed at too.

The chipmunk (or chippie) is one of the more delightful creatures in Ontario. A smaller version of the squirrel, it is never as tame nor as given to living in cities; it moves with lightning speed, its little tail arched behind it. This one was attracted by the smell of peanuts, so strong as to eclipse the usually dangerous smell of humans. He sat and watched. The blind creature facing it might or might not be alive, he decided. It smelled of nut, oily and pungent. Chippie had never before seen a nut so big, and he was wary, lest such a large nut might be the eater, not the eaten. He advanced a few paces then stopped, aware that the nut had eyes which moved as he moved. Then the nut spoke:

“Long ago,” said Debbie in a trance,”

Linda picked up the rhyme in her sleep:

“Long ago In ice and snow”

“Before the trees could feel the breeze.”

“The sky was blue,

“The earth was true”

“The sky was blue,

“The earth was true.”

This was a new game. They had never played this game before, although they loved to read children’s books in their room. It was naturally Linda who read and Debbie who asked questions or dozed. Now little Debbie had taken the lead. Both were quite held in the mystery of the ancient scene their verse had created. During this recital, the chipmunk had remained frozen. Once they stopped, he settled on his haunches, and then scurried, stopping only when he came to the top of a huge rock which lay inside the grove of trees. There he stopped, looked back, and wondered what he had been so frightened of. Neither of the two nut-smelling things was moving. He ran down the rock and sniffed. Still no stir. Rummaging around, he found some of the nut stuff near them, and nibbled away as it wasn’t hard enough for a real nut, but it was satisfying.

The chipmunk ran off, scampering over Linda’s leg on the way. She stirred slightly, then got more comfortable on her log, Flies buzzed. Wings flapped. The girls slept on. 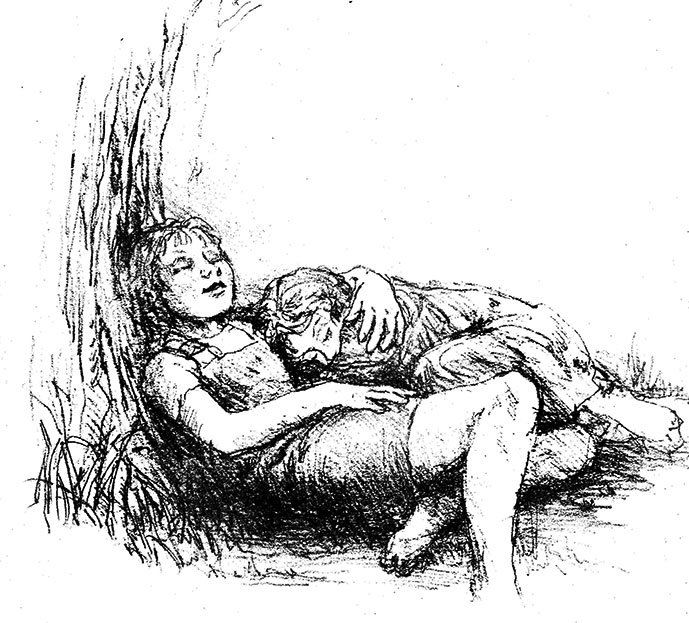