Own Your Own Ontario 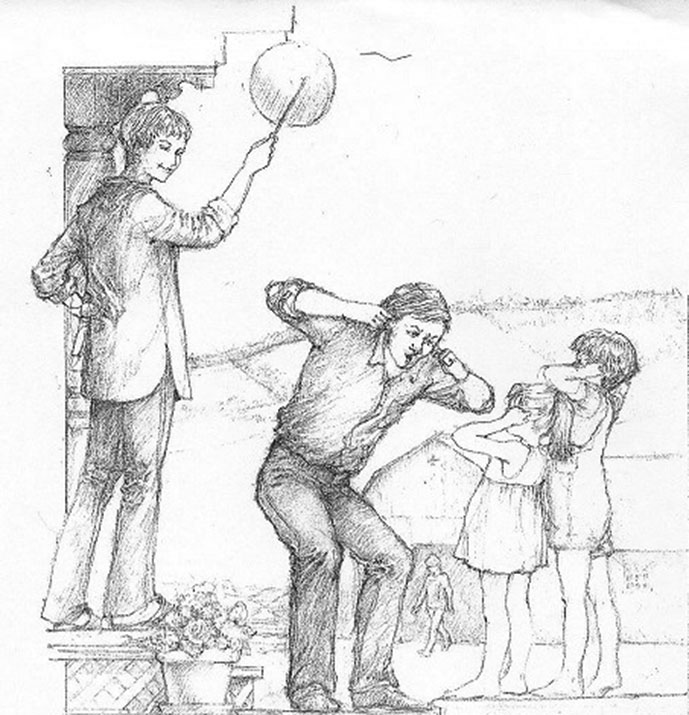 Mrs. Scace put the finishing touches to her salad, turned the soup to “simmer” and, pushing open the kitchen door, reached an iron rod which hung on a nail. Swinging the rod lightly, she banged a great round disc of metal which was suspended by two wires from the verandah eaves. The clatter was enormous, vile enough to be heard by her children, wherever they may have wandered. It also drowned out the noise of the family car driving gently up the road, and stopping by the garage.

Albert Scace unloaded his long legs from the front seat and followed them with his long solemn face and more red hair than either Brian or Linda could boast. Or so it seemed on his big head.

“Jeez, Thelma, you’d think the kids were halfway between Warkworth and Percy Boom the racket that thing makes.”

“Bert, if they were only in the barn and I fired a cannon they sometimes wouldn’t notice.”

A shrieking arose from over the road allowance as the two girls came running up the hill.

“Now you’ll wish we were as deaf as they are when you try to call them.”

“Bert, the girls are noisy, but they are here. It’ll take more whacks at the gong to bring your sex to lunch.” And Thelma aimed more blows at the gong.

The little girls had by now reached the house and were both scrambling all over their Daddy, who tried to grab them for a hug between putting his fingers in his ears and making faces at the gong. Then all three danced off into the house, fingers in ears and trying to outdo each other in making faces.

Even Thelma was beginning to be stunned by the noise she made when Kevin appeared over the side of the hill. He was careful not to come up by way of the road allowances, and had been scratched by thorns as he made his way around to appear almost directly up the bluff.

“Kevin, what have you been up to?”

“Slipped on the bluff, Mum, and fell into the thorns.”

“Never mind. Go clean yourself up and put something on those cuts.

“Playing near the barn, I think.”

He went indoors, followed by his mother. Thelma could rely on Brian to come as soon as he heard the lunch bell. Brian came puffing up the hill at the last moment, having heard the bell when he was still talking to George Wiseman. He hastily washed at the kitchen sink and slid into his chair just as the meal was beginning.

“Something big going on in the barn?” asked his mother.

Kevin stopped in mid-mouthful, wondering if Brian had been near when he did his manly, daring, deed at the play village.

“What was going on down there?” asked his father.

“I saw Mr. Wiseman drive his tractor there and I went to see.”

“And listen, I expect,” said Thelma.

“He was picking up sand for Russell’s playbox.”

Linda and Debbie had tried to be quiet and pretend that nothing unusual had happened that morning, but now they began to giggle.

“That’s not what they’re excited about,” said Thelma, “They were bothering Kevin all morning.”

“Those brats couldn’t bug me if they tried.”

Thelma nearly spat up her soup.

“That’s not the tune you were playing earlier~”

“Never mind Mum, I’m too big for them anyway.”

“I hope so.” Thelma looked at her husband.

“How are things in the great County Conservation Authority today?”

“Oh, we have some good plans coming for a pool and mini-marina at Hartford. I’ve been working on them.”

“What use would a marina be on Hartford pond? Even tiny sailboats need somewhere to go.”

“The idea would be to clear the marshes through to Rice Lake, like the old Percy Portage.”

“That’ll take a packet of money.”

“And keep bread on our table too. Of course, it’s politics. The Member needs a lot of votes up around Hartford if he’s to get in again.”

Linda spoke up. “Daddy, who is the Member?”

“Member of the Legislature of Ontario.”

“Or Provincial Parliament, if you want to sound grand.” said her mother. “Which with Hagerman is most of the time.”

At this point the sound of a car coming up the drive was heard through the open windows.

“Wonder who that is,” said Albert Scace, getting up to go to the door.

The family looked up, inquiringly, as their father greeted a fat man who got out of his long green car. He was wearing mod city clothes, dark green, and the girls began giggling again when they noticed the little bright green feather in his equally dark green hat.

“Queer bird, if you ask me,” said Kevin.

“Come in, won’t you,” said Albert Scace. “The family is just half-way through lunch.” The children could tell by his voice that he was not pleased about interrupting his

own lunch. But the visitor was unaware of this.

No one had had any intention of getting up.

“What I have to say should be of interest to all the family. My name is Edward Bondworthy, and I believe you must be Mr. Albert Scace.”

“Yes. And this is Mrs. Scace and these are my children. Please sit down. Don’t mind if I get on with my lunch, I have to get back to work.”

“But you have a good looking piece of acreage here, Mr.Scace.”

“Some good, some not so good. But not enough for a man to support his family. My father could, but not me.”

“A good many people have found they have too much land they can’t use. And that’s why I am here to see you.”

“Oh, what do you mean?” The children could see that their father’s initial impatience was being replaced by curiosity.

“Mr. Scace. I represent a new movement of people designed to give everyone a patriotic sense of belonging to Canada!”

“Mummy, what is patriotic?” interrupted Linda.

Mr. Bondworthy beamed at Linda and was about to explain when Thelma looked him straight in the eye and said:

“Patriotism is the last refuge of the scoundrel.”

“Oh, er, Mrs. Scace, that’s a ter– ” Bondworthy controlled himself and set his face in order all over, saying to Albert, “Mrs. Scace has quite a sense of humour.”

It was Kevin’s turn to interrupt.

“Got any grapes today, Mum?”

“No, I’m not buying grapes while we have to import them from California. That way we help keep the workers poor who can’t get enough for their labour.”

Brian thought aloud, “But how does that help?”

“Now”, Albert said impatiently, “if everyone would just give us a chance, we’ll hear what Mr. Bondworthy wants to tell us.”

Bondworthy was getting rather uneasy, giving side glances towards Thelma. The children noticed this, and were quietly enjoying the discomfort of the kind of man who doesn’t expect a woman to have any ideas or anything to say.

He ventured, “I represent Own your Own Ontario. Surely you must have heard of it?” “Ah,” said Thelma, “Something to do with buying back Canadian resources from Americans?”

“No Mrs. Scace,” Bondworthy was plainly shaken, “In fact, our company could not have started without capital from New York.”

The resemblance between Thelma and Kevin could not have been clearer at this point: their eyebrows lifted, their upper lips curled. Brian and Linda looked on cheerfully, while Debbie played with cake crumbs on her plate.

“So this is a company,” said Albert, “I thought you said it was a popular movement.”

“Yes, it is increasingly popular. We have many inquiries at the sign of the Triple “O”, and this summer we are running buses from the city of whole families, and there are swings for the kiddies and pop for everyone.”

“Everyone who joins the O-O-O, Triple O family, can own his own piece of land and enjoy the beauty of his inheritance.”

“That’s a good name for it. We like to think of it as a family, a happy family of people sharing the privilege of living among the rolling hills of Ontario.”

“Well, Mr. Bondworthy, this is very interesting, but where do I come in?”

“A number of your neighbors, Mr. Scace, have allowed us options on their land, and we have already taken options on two farms near you.”

“What are opshins?” Brian asked.

Thelma interjected: “Are those your machines down by Warkworth scraping the topsoil away?”

“Yes indeed, Mrs. Scace, we are levelling mountains and filling in valleys just like the prophets in the Bible.”

She looked him in the eye.

“Unless I miss my guess, the profits you are after have nothing to do with religion.”

“Well, really, that’s most unfair; never mind. Mr. Scace, Own your Own Ontario would like to buy an option on your surplus and unused acreage.”

The children hung on their father’s words. His red hair seemed to bristle with static.

“Yes, and I have some attractive agreements for you to sign.”

Bondworthy reached down to the briefcase beside his chair.

Albert rose from his chair.

“I’m not doing any business of that kind with you.”

“And now if you’ll excuse me, I think you’d better go. I have to get back to work and want a word with my wife before I leave.”

“I don’t see why I should. I already own my own Ontario, and you seem to think that is a good idea.”

He ushered the salesman out the door, and the children crowded behind to hear every word.

“Mr. Scace, I happen to know where you work, and I could put in a good word with the Conservation Authority.”

“I thought you thought I farmed this land.”

Albert had opened the car door for Bondworthy.

“Well, I looked you up before I came.”

“Did you? I’d look very long and hard before I’d let you set foot on my land again.”

“That’s insulting. I’ll have you know that I could put in a bad word with the Authority just as easily as a good one. Say you’re holding up progress!”

“Just you try it and see what happens. But if you come nosing around my property again I’ll bury you ten feet deep in manure.” 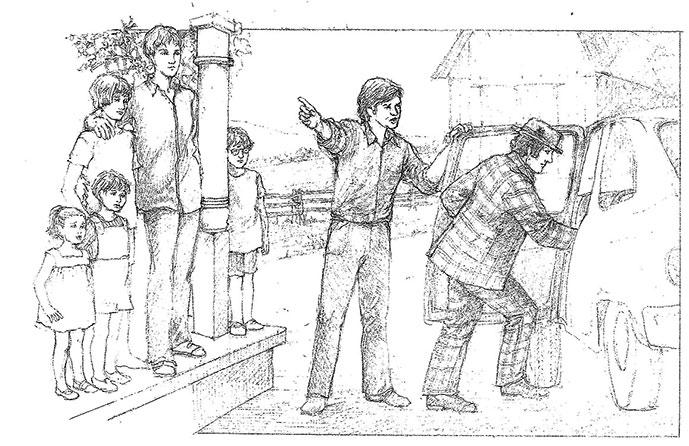 He slammed the car door on Bondworthy, who already had the motor going.

“I’ll report you for issuing threats, Scace!” he shouted as he drove off.

“Which is where you belong!” shouted Albert after him.

“No, too good for him,” said Thelma, grinning from the doorstep.