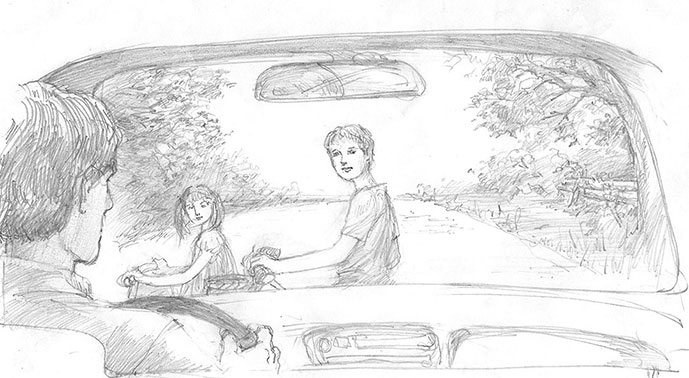 In the time — the Topher’s time — he had been following John’s mind, the Topher himself had wheeled his cycle into the village of Warkworth and, turning left at the BeeHive, had walked slowly towards the Norham end of the village.


There were only a few people around in the hot noon. Half way along, he met the Reeve, Albert Scace’s brother, and they exchanged greetings in the usual country fashion. “Major” Timothy Scace looked after the strange tall boy, wondering who he could be.

The Topher had not been aware of meeting anyone, and had spoken out of the preoccupations of the other existence he was leading through the eyes of John. So it happened that at the moment that John was pouring his imaginary libation of milk to the Little People from the top of the hill, and the Topher’s mind was wholly taken up with seeing what was happening through John’s eyes, the Topher’s body and bicycle, were coming up the same hill – in 1974 – and his ears became aware of the sound of a car.

His shout had the effect which we might expect, the same effect as a roaring scream from Debbie. It shook the girls out of the year 1838, and back into the reality of Warkworth. The road changed back and John disappeared. But this time there were some unexpected side effects of the time travel. Truman McQoid, a staunch member of the Township Council, had just completed an inspection of the Township works Department Depot at the top of the hill near the Norham Rd. He had been looking into the complaint that the truck drivers had to do all their own mechanical work on their machines and so did not have enough time to attend to the gravel hauling and other business of the Department.

He was, fortunately, driving slowly, like many another good man of the country, who knows the secret of success is not the speed with which you get where you’re going, but the frame of mind you’re in when you get there. As Truman nosed over the top of the hill, he looked cheerily down at the old iron bridge, the road beyond the service station, and the huddle of buildings around the village plumber’s home.

Coming up the road beyond the bridge was one of those hippie types with long hair, pushing a woman’s bike. Woman’s bike! Truman hastily glanced again at the bare torso of the young man to assure himself it was a man. At this moment, the Topher – for it was he – raised both hands to his mouth, the bike fell away, and he shouted, “Debbie! Linda! Get off the road!”

But Truman could see no one to shout at; however, in case they were very small children and very close to his car, he put the brakes on quickly, jerking off his glasses as he did so.

He blinked in the sunlight. For a moment or two he thought he must have had a concussion, for the scene around him had totally changed. Instead of the road was a rutty path, instead of the bridge, iron railings and cement curbs, there was a perilous wooden thing. The village did not seem to be there though the trees were, with smoke rising at a distance. The shouting youth was gone, and just to the right of his car, was another young man, also with long hair, though dark, and he was kneeling doing something in the sand beside a tree – a tree which could not be there because it grew out where he would expect the shoulder of the motor road to be.

But, most surprisingly of all, two little girls with bicycles – Albert Scaces’ little girls, he remembered, – appeared from nowhere in front of his car. Good thing he stopped.

At this point the strange scene vanished. The road was back to normal, but the little girls remained. They visibly shrunk back at the sight of the car, and began to move their machines over to the side of the road. And the first young man with the bicycle, the shouting one, was back in sight.

“Debbie! Linda! Get off the road!

These words were heard by someone else. Whatever the cause, the time gap between 1838 and 1974 was travelled in a few moments in several directions by some people who were not accustomed to it. This time it was John. John had seen the Little People several times now, but he had not been aware of any time change. The only travelling in time which he could even imagine was either to do with his mother or with Martha. He wanted to be back to a time when his mother was alive, and to go forward to a time when he would have his Martha.

But he did not know much about time and certainly did not think about it. So, just as the Little People were beginning to fade from his sight, he heard the Topher’s words, as though they had been echoed and returned a few moments after their delivery. A strange shape, long, shiny, and of metal seemed to be hovering at his left elbow, as he knelt making his ritual gestures of offering milk.

And for him too, as for Truman McQuoid, but in the other direction, time flashed a big change of scene. He saw, without understanding, the service station and the vehicles parked around it, the gas pump, and the blue asphalt street. But at the centre of his vision was the Topher, a strong tall young man with long blond hair about his shoulders, his chest bare (John shuddered at the shame of it!) and his hands were up to his face. He was pushing one of those wheeling machines the Little People had, – the thing was falling over to one side even as John looked.

Then the Topher himself, who had uttered the time shattering words, heard the words again, his own words from his own voice, but now through the consciousness of John. There was a strange double vision, a sense of being in two places at once for the Topher. He was aware of standing looking at the girls and the now braked car. He was also aware of himself looking through the mind of John, and seeing his own tanned body standing at the moment shouting. Then he knew that for the first time, John was seeing him, and he whispered to himself,

“John, it’s me! I’ve always been with you! We must protect you for Martha’s sake!”

To John, the blond youth was a God, and it was as though these words had been uttered aloud and come across the thirty feet of road between himself and the apparition. The words themselves he hardly understood, for the only Me he knew was himself, and the “We” must be the God Himself. It was comforting to think that Martha was a joint concern; John could feel the warmth and urgency of the words, what-ever they meant, but his own response was to throw himself flat on the ground in speechless terror. The appearance of God Himself had come to him; the Little People were messengers, but this form of a beautiful young man must mean the gates of heaven. He grovelled in the moss by the tree’s roots.

The girls, meanwhile, had heard the shout and seen the car coming in the same instant. But when Linda saw that the car was stopped, it occurred to her, urgently, that she should see John before tomorrow, before tomorrow in John’s time, at least, for John was such a dolt he would probably be caught before tomorrow, before he even got the news to the Norham rebels. So, unthinking about time, she shouted, “John, John! Go to the Curtises now… right now!”

John did not hear the worlds nor see Linda, but the urge came to him. As he staggered to his feet, now in a familiar scene, he could hear the distant sounds at the other end of Percy Mills, which reminded him of the militia. A voice seemed to be saying to him “Go to Curtises! Right now!” and he turned quickly and went back into the trees. He could get almost the whole way back to Curtises in the shelter of the woods. So urgent was the voice within him that he forgot to feel frightened.

The woods skirted a field at the top of the hill, the place where later was to be sited the yard of the Department of Works. In the distance he could see Sugar Grove, where he should deliver his message, and where he would spend a few moments with his Martha.

Thelma Scace also heard the Topher’s shout. The upset of the bicycles under the feet of Sergeant Cameron had pressed the Call button on the walkie-talkie, and also the Send button — the Call button which would call Thelma with a buzz in her home, and the Send Button which would transmit from Linda and Debbie. By the time Thelma got to her instrument, there was an odd mixture of sounds coming from it.

Puzzled, but not alarmed, she listened in as she did some work in the kitchen. Thus it happened that she heard the whole conversation between the children and John. She could not make out who John was; his voice was quite different from Warkworth voices — perhaps it was a little like Ottawa valley speech — but the man seemed to be using some words in unusual ways. She must ask the girls who this yet different friend was.

There seemed to be a complicated game going on involving Major Campbell. The Topher’s bellow – “Get off the road” – truly alarmed her, and she began pressing her own call button to get the girls’ attention. For a few moments, while the girls were busy getting out of Truman McQuoid’s way, there was confusion, and their attention was wholly diverted from the walkie-talkie, which they had not been thinking about; their mother’s loud buzz was a mere background detail as Linda called her final message to John.

Then, as Linda finished, realizing that John was gone beyond her voice’s power, she heard the insistent electronic sound.

“Here we are Mummy!”

“Are you all right?”

“Yes Mummy, just a bit out of breath.”

“In Percy Mills, Mummy, on the Norham Road.”

“Just the two of us and the Topher, and Mr. McQuoid is here with his car.”

“Yes dear, you’d better come. You can tell me what you’re doing in that game.”

Debbie and Linda looked at each other in horror. By this time the Topher was with them, and he sized up the situation. He said, “May I?” to Linda and took the microphone.

“Glad to hear you’re with them. What’s this about the girls being on the road?”

“Part of the game, Mrs. Scace. Shall I come home with them and tell you about it?”

“Have you been in on the game too?”

Thelma’s voice was warm and husky. She enjoyed teasing the young man, who seemed to prefer the company of children to that of older people. The Topher sensed this, and blushed. Thelma could not see the blush, but Debbie took due note of it.