The Battle of Norham 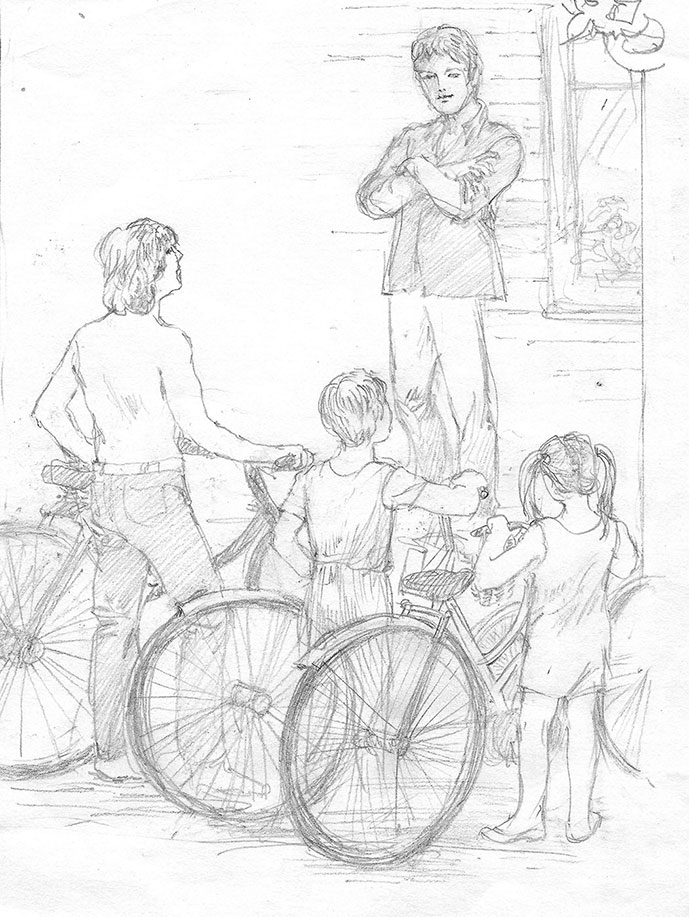 Neither the Major, nor Linda who followed just far enough behind not to alarm the horse further, could know who had fired the shot. The tableau of the two sides — by now a mere dozen vengeful militia and the whole horde of farmers facing one another, guns aimed, remained still for their arrival.


The Major did not stop at his men, though he sheathed his sword and drew his pistol; he galloped into No Man’s Land between the opposing forces.

“This is no time for Canadians to draw blood among themselves.”

Wheeling his horse, he fully faced the rebels.

“The men you see behind me with guns have been ordered away; if they fire at you, they are disobeying my orders and subject to military discipline and the law of the land. You too are subject to law and the rule of law. If you do not lay down your firearms also, by the time my men have done so, you will be rebelling against the very Governor to whom you have made your appeal!”

Behind him, the Scots Sergeant, swearing in Gaelic, threw down his weapons, and signalled to the others to do the same. A Corporal came from the group, gathering the Sergeant’s musket and pistol, and began to stack the weapons to one side of the road.

By the time the angry Major turned around to face them, his small remnant were standing to attention, awaiting his command.

“Men! I will overlook your lapse of discipline. You are to dismiss, and I go now to dismiss the company up yonder. By sundown, let no man who does not
belong in Norham be found this side of Sugar Grove. Dis-miss!”

The Major did not wait to see the results of his orders. Already in the distance he could hear a commotion up at the barn, and he galloped off to dismiss the rest. Thus it was that there was, after all, a “Battle of Norham,” for Comfort Curtis walked out in front of his followers yelling, “Take yerself off, you blood-thirsty Scot. The Major’s a man of sense which you are not!”

Before Cameron could respond, the crowd cried

“Liberty for Canadians! Away with privilege!” and John Quakenbush ran out waving his Eagle in the face of the Sergeant and the others.

The Sergeant turned as scarlet as his coat, and screaming a Highland war cry which sounded like a bursting bagpipe, rushed at John. At that very moment Debbie, who had forgotten her own danger in her fascination with what was happening, got in the way, bicycle and all.

But it was the Sergeant who needed the warning; John could both see and hear the girls, and stood still, while the Sergeant ran on, his fists doubled. There were no orders from the Major to desist from the use of his hands, and he would teach the young pup a lesson and take his rebel flag as well.

But once again, he tripped on the invisible bike and as it fell he entangled his legs in the wheel and the handle bar. At that moment, John thrust the flag on it’s gun-pole at Comfort, and hit out at the Scot. Thus it seemed to others that John had knocked the huge and powerful Sergeant down.

The redcoats leaped to defend their comrade, and soon there was a good brawl in progress. Debbie disentangled herself from the Sergeant and wheeled to Linda. They looked back at the melee. In spite of the Sergeant’s fall and momentary confusion he was back on his feet. Joining his comrades he flailed about with his fists and feet, knocking guns out of the hands of those that held them, and starting to knock out a few teeth.

The onslaught of the few militia men was brave and determined, and the
line of farmers began to break in the middle. The two Camerons fought like crazy savages, knocking heads together and throwing one man on top of another, giving kicks to those that were down before they turned to the next. Comfort pushed the flag back to John:

“Here boy, I know more about this game than you!”

He had some wrestling experience, it seemed, for wiry as he was, he could twist a soldier’s arm and send him screaming in pain to the ground.

“Comrades!” he shouted, “We have them licked! Don’t turn back now!”

At this point Linda noticed that some of the rebels had picked up scattered guns and were moving in to shoot the soldiers. Dropping her bicycle she rushed in, snatching guns from those who tried to do this, and throwing the heavy weapons as far as she could. So it happened that not another shot was fired, and the astonished rebels, feeling their weapons snatched from their hands, moved in with their fists also to meet the frenzied redcoats. The fight raged on, but little by little, each redcoat found that for every rebel he knocked down, three attacked him , and soon most soldiers were on the ground being pummelled and kicked.

Fortunately, none of the farm implements were used, or some would have died. But now the sun came out again, hot after the rain, and Curtis called a halt.

Most of the rebels obeyed him, but one or two still pounded the Scots brothers. The Sergeant was unconscious, as were some of the rebels he had hit. The Corporal, who had already once played the role of peacemaker by stacking weapons, called out:

“Halt! Let us take our wounded and leave. No more! No more!”

So those who were not pouring blood from the nose and mouth helped their comrades. Several red coats had been torn off, and were now raised on poles and hay forks by the rebels. The Sergeant was carried off, and the stacked guns were bundled together. The little defeated army slowly trudged up the incline, to the jeers of their victors.

“And see that you get your backsides out of my barn and house,” called John Curtis, “or I’ll bring you to the magistrate for trespass!”

The farmers turned on his brother, cheering their leader, and hoisted him
up in their arms. John, his flag held high walked ahead, and others found the two ends of the soaked red banner. Slowly a procession formed, and the chanting crowd walked up towards Percy Mills, a good distance behind the retreating militia.

Martha rushed up to John, having dared now to come from the tavern.

“Dear John! You were so brave! You carried my flag!”

John walked on\ proudly, the girl holding his arm. Linda and Debbie winked at each other. They too joined the procession, unseen among the cheering.
——————–
At that moment the Topher woke up from his long afternoon sleep. He looked about him. Where was he? A moment ago, he had been with John proudly carrying the flag, Martha at his side, and he knew the sweetness of victory. But here he was, in a strange house, on a sweltering day, and a strange woman looking at him.

“Mrs. Scace phoned and asks me to wake you. Says yer to find the girls and bring them home.”

“You fainted dear, out on the road, I gave you tea and you’ve slept for two hours. Do you feel better now?” “Oh, yes, thank you.” He struggled to his feet, and brushed his long hair back.

“It was very good of you to do this for me. I don’t think I’ve ever fainted before.”

“It must have been the heat. Now, where are those little girls, or would you know?”

Mrs. MacAndrew doubted that he would, but was doing as Thelma Scace had asked. Irresponsible, she called it, the boy sleeping away and the mother not caring, and the same two little girls lost a whole day this June past.

“Oh, yes, I know where they are. Just past Stone’s Tavern on the way
to Sugar Grove.”

“Stone’s Tavern?” Sugar Grove? There’s no taverns in this township, I’ll have you know!”

Indignation mixed with her astonishment. The boy must be out of his mind.

“Oh, I’m sorry! It’s a sort of game. I mean they are on the way from Norham to Percy Mills! Thank you very much again. Is my bike outside?”

“Mrs. Scace’s bicycle you borrowed and fainted over is by the door. Now be off and catch those girls.”

“MacAndrew. And you’re welcome ..Did you say Percy Mills?”

She stood watching him leave. That was a strange one. Just wait till she told the bridge club. They didn’t think much of Thelma Scace anyways.

The Topher mounted on his bike and went as fast as he could up the gravel road until he reached the paved road where Stone’s Tavern should have been. It was now Edward’s Market, with a Gulf Oil gas pump to one side. He wheeled to the pavement and looked towards Sugar Grove. At first he saw nothing unusual on the street, but just up a bit, where the old man was watering his peonies at the side of the road, there was a shimmer on the road. He was sure that was where the girls would be: he rode on shouting as he went:

The girls, following the Norham Victory Parade, looked back as they heard his voice. As they turned — no more Stone’s Tavern, no more sign of the battle that raged, no more great trees, dripping yet from the storm overhanging the road. Just Norham as they had always known it, and the Topher coming back as fast as he could, with a huge grin on his face.

They stopped their bikes and looked forward again. The parade vanished. The highway curved away to the left and the gravel road led up to where Curtis’ barn still stood, much older now, and no livestock or soldiery around its stone foundations.

“We won, Tophy, We won! We won the Battle! The redcoats went home!”

The old man with the peonies looked up. He hadn’t seen the girls a moment before. Funny, it must be the heat. Then he heard the young man.

“There was this big thunderstorm and it stopped them shooting each other.” Debbie replied.

“Hey Deb,” said Linda, “Maybe Mum tried to call us, and our radios
were wet!”

“We talked to each other on them.” said Debbie.

“Thunderstorm? Soaking wet?” said the old man to himself, looking at
the parched ground he was watering. Then he looked at the girls. They
certainly were wet. He looked again at his hose, peacefully rotating over the flower bed.

“I think I’d better get inside. Out of the hot sun. Not good for a man my age.”