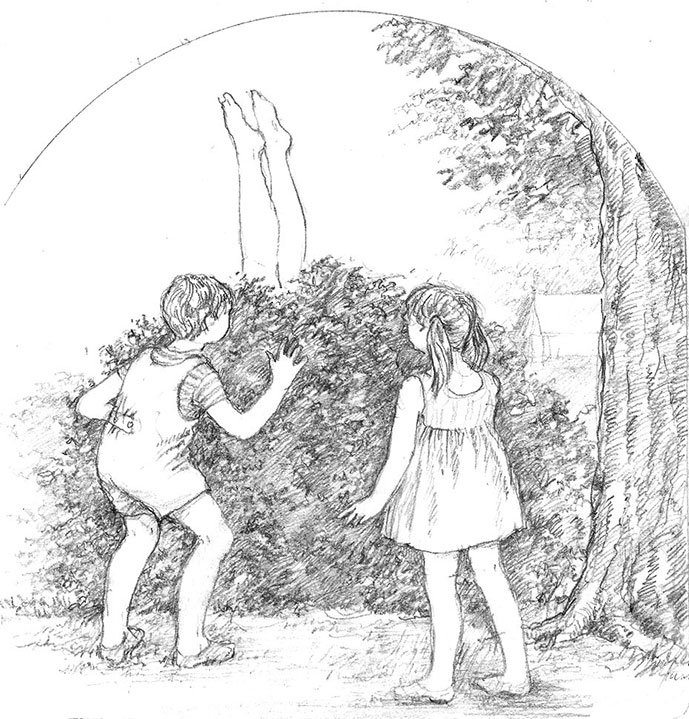 It was. It was scarcely hidden, except that there were no houses in sight and the field was slightly unexpected. It was a rich field, now in oats, and was about four acres in size.


“Debbie, do you remember Kevin said there was a dried up pond bed and remains of a grist mill beyond this field?”

“No,” said Debbie innocently, “I thought Hippies’ Pond would be about there.”

“That’s more than half a mile up stream. This was a really nice place, according to Kev. Sort of wild and lonely looking. Wanta go look for it?”

“Okay, Lindy. Can we take our bikes?”

“Yes, but we’ll have to walk them, at least around the edge of the field. Too rough.”

Debbie wasn’t sure that this was going to get her to Hippies’ Pond, but at least it would be seeing something new. So they skirted the field of oats, and came to the lovely cedar woods through which a path led. It was quiet, and cool, a lovely secret kind of place. Then all of a sudden, there was a newly erected fence, right across the path. They could see there was open space beyond, so, leaving their bikes, they climbed the fence.

It was hard to keep out snowmobiles in winter. At one time it had been a pond, and now it was a meadow. The Mill River divided into two channels, and each channel had a separate exit through a great wall of man-moved earth, which had been a dam. Over each exit there was a perilous bridge of rotting timbers.

The girls explored it back and forth. The only remains of the grist mill were some foundations near one of the stream’s channels. Linda and Debbie sat down and looked at the scene. They might be in another world; there were no familiar landmarks, no sights they had seen before. This was the beauty of being able to get away by themselves.

“Lindy, let’s go up and see where the two channels join.”

Linda quoted Norah as though she had been Law and The Prophets. Her lunch-time drowsiness had gone, and her usual bossiness had returned.

“That silly Norah. She said such funny things.”

“You’re the silly one. You have to have a reason for going one way or the other.”

“Why do you have to have a reason? Why not just do what you feel like?”

“Cause feelings are silly. You have to think.”

Debbie thought for a minute. Then, while Linda was gazing imperiously off into a world where everything had reasons, she looked, first upstream, and then downstream. Downstream the channels joined not far away, and there was nothing interesting about the grasses and rushes there. Upstream, the link was not in sight; a clump of more cedars and conical junipers was all she could see.

“Okay. So we’ll be going to where things come from.”

Linda was deeply impressed with herself. She didn’t know the word “philosophical.” She had probably heard it, but not paid much attention, but she had that smug look of someone who has been philosophical to her own satisfaction, whether or not it had done any-one else any good.

They set off. The ground would have been quite soggy in the spring, but by now was just rough, with clods and tussocks of grass to stumble over. There were small new willows everywhere, and then small child-high cedars. These gave way to larger cedars, all conical and in clumps, and finally behind them they could see tall spire-like junipers. But they never reached the feet of the junipers, for there was a path going through the larger cedars. It was a twisty path which seemed to go halfway round one cedar, and then turn the other way to go half way round the next. The twigs and branches had been broken off up to about six feet, so the girls made no noise. The quiet was upon them even more than in the first cedar woods where they had to leave their bikes.

Ahead of them was a kind of clearing, about twelve feet wide. The cedars towered twenty or more feet into the air, and made a funnel, so that the space above was only a few feet wide. They looked up, wondering at the peacefulness and magic of the trees. Suddenly Debbie gasped, and grabbed her sister’s arm. With her other hand she pointed. Both girls held their breath.

Just over a small cedar ahead of them they could see two large and clearly male feet together pointing straight up in the air right up to the top of the funnel. With a slight shift of their position, they could see as far down as the knees.

“A bare hairy hippie.” She whispered.

Linda held her tight and whispered back; “We shouldn’t be here.”

With this Debbie pulled away and stepped lightly around the tree.

The hippie wasn’t as bare as her imagination had hoped; he was in swimming trunks. A six-foot young man, very brown, long hair covering his head, stood motionless on head and hands.

Debbie crooked her finger and Linda stepped out too. The sisters were dumbfounded. Why would anyone stand on his head like that? He didn’t seem to notice them, and might well be asleep. They could not see his face under all the reversed hair. Around him there were some simple camping things, and there was a little tent to one side, its flaps up, taking the air.

The girls were afraid to move. They felt sure that if they did he would wake up, or vanish, or something strange would happen. It reminded them of their experience at Drumlin Hill. They here further paralysed when they realized that a little sound was coming from the man. At first it sounded like a hum. Then it began to shape into syllables, but the sound was a repetition.

Gradually, it increased in volume, till it became a great rumble. The girls trembled. Then with a great OHM..om the man leaped in the air and landed on his feet.

At that, the young man turned and faced them in a defensive pose, all tense. The girls huddled back, and Debbie opened her mouth for another scream.

“You frightened us,” said Debbie, pouting.

“I’m sorry. How long have you been standing there?”

“Well, be my guests. Here, let me find a blanket. We can sit down.”

There was an awkward silence as they looked at each other. The man — he was just past being a boy — was not very hairy on his body, which was something of a disappointment to Debbie. But he made up for this with his abundant head of hair, long and thick and wavy. He had a long but not narrow face, a rather thin-lipped mouth, and deep blue eyes. Linda was cheered that the eyes had large round glasses on them, since she subscribed to the myth that glasses are worn by intelligent people.

What he saw was two quite young girls, a bit large for their ages: one blonde, the pretty one….one red-haired, freckle faced and plumpish. The blonde, apparently the younger, was pure female, and reminded him of some funny little animal. The older was obviously more complicated a person, with humorous but slightly shy blue eyes.

“What are your names?”

Another silence followed. Their new discovery looked at them, smiling, waiting for them to say something. Finally, Debbie tossed her head and wiggled, and said,

“Do I talk funny and wear funny clothes?”

“You don’t talk funny and you aren’t wearing very much!” Debbie blurted out.

“Can I ask you another question?”

“What kind of people are you?”

“Just kids. We live near here on a farm.”

“Now will you tell us your name, please?”

“Whoever gave you a funny name like that?” Debbie teased.

“My Daddy and Mummy.”

“Where’d they get it?” Debbie was certainly good at talking to the opposite sex.

“Well, I had a funny way of walking when I was little, and they called it ‘Tophing’ so I am Topher. They even sang a song about it.”

“Sing it for us!” Debbie poured on the charm.”

“Okay.” Topher took down his guitar, which was hanging on a branch, and he began.

“If you should meet a Topher,
just tophing along
you should say “Hi Topher!
and won’t you sing a song?”

Now this is what the Tophs do,
it won’t take very long,
He will si-ing it for you
this funny little song:

If you should meet a Topher,
just tophing along……
You should sa-ay “Hi, Topher!
won’t you sing a song?”

“That’s the song. What I just sung for you.”

“Tell us more about yourself” said Debbie.

“Why not? You ask the questions.”

Debbie rocked back and forth on her heels.

“Do you have a girlfriend?”

“Yes, I have.” The Topher looked a little strange as he said it.

“Works in a library.”

The Topher rocked back on his heels and laughed.

Then Linda laughed too, and the tension was broken. The Topher got up and rummaged for his things.

“Here,” he said, “I’m not a very good host. I should offer you some refreshment. Have some of these.”

He held out some small yellow fruit.

“May apples. They grow all around here.”

The girls sampled them.

Then Linda jumped up in alarm.

“Debbie.! We’ve been away from our bikes for ages. Mummy might be trying to get us. We’ll have to go.”

“I’m sorry,” said the Topher. “We were just beginning to get to know each other.”

“Can we come again?” said Debbie.

“Of course, Debbie, anytime. When will you come?”

“Lindy, can we come tomorrow?”

“Okay, Debbie, if you want. Are you sure you don’t mind?”

“Not at all. I love to have visitors. Come for tea.”

“Okay then. See you tomorrow.”

The girls scampered off along the river and over the rickety bridge, Debbie chattering, and Linda quite pleased, because they had made a new friend, and he wasn’t too much like a grownup. But they never asked him why he was standing on his head.